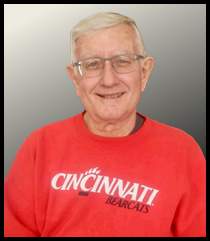 Chris was born in East Orange, NJ, to Winifred (Ruter) and Gottfried F. Merkel. In 1946, young Chris and his family moved to their home in College Hill, OH, and he became a Cincinnati boy, the city he always held close to his heart though he lived most of his life in Pasadena, California. As a young boy he enjoyed playing baseball, collecting baseball cards and taking trips to Crosley Field to watch baseball games.

A graduate of Woodward High School (1961), Chris attended the University of Cincinnati for a time and then enlisted in the US Air Force. He especially enjoyed his assignment at March AFB in California. Following his discharge from the USAF (1966), he returned to UC to complete his undergraduate degree (1969). California called, and he applied to and was admitted into a Masters program at another UC, the University of California at Santa Barbara, where he earned his MA in chemistry and biochemistry in 1971. He often shared fond memories of Santa Barbara where he tried surfing, but realized that basketball was more fun, and he was better at it. He would frequently play pick-up games with other students while also exploring the California countryside.  Cincinnati drew him back, and he was admitted to the University of Cincinnati College of Medicine to a doctoral program, receiving his PhD in biochemistry (1976). In 1975, he became a member of SigmaXi, the scientific research society focused on the promotion of research in science.  California lured him west again where he was a postdoctoral fellow at the California Institute of Technology (1976-1980). He spent his career as a professor of biochemistry at Western University of Health Sciences in Pomona, CA, retiring in 2004. After retirement, he missed teaching and the interaction with the students and went back to work as a lecturer in chemistry at Azusa Pacific University instructing science and nursing students (2004-2009). He continued to assist a number of students and others as their advisor and mentor through the ensuing years.

Chris enjoyed classical music, a love rooted in his childhood home where Cincinnati Symphony Orchestra members often gave afternoon concerts to gatherings of friends and neighbors at his parent’s home. For many years he played the flute as a hobby and played many of the classics from Beethoven, Mozart, Haydn and Handel.  He followed sports teams—baseball and football, college and professional but always had a little extra cheer for the Cincinnati Bearcats, Bengals and Reds. Always curious, Chris was often seen with a book in his hand whether in his living room or a coffee shop. And he was a master of trivia—he knew interesting and little-known facts and stories about people and places, contemporary and historical. A scientist, he understood how things worked. As a professor he enjoyed teaching others how things worked.

A Celebration of Chris’ Life will be held on Zoom at 10 AM (Pacific Time) on Saturday, November 20, 2021. To join this celebration and receive the Zoom link, please visit https://www.rememberingchrismerkel.com/ to RSVP.  Chris was buried at Spring Grove Cemetery in Cincinnati, Ohio.

In lieu of flowers, Chris’ family invites contributions to: The Leukemia Research Foundation (https://allbloodcancers.org) or the Cincinnati Symphony Orchestra (https://www.cincinnatisymphony.org/).