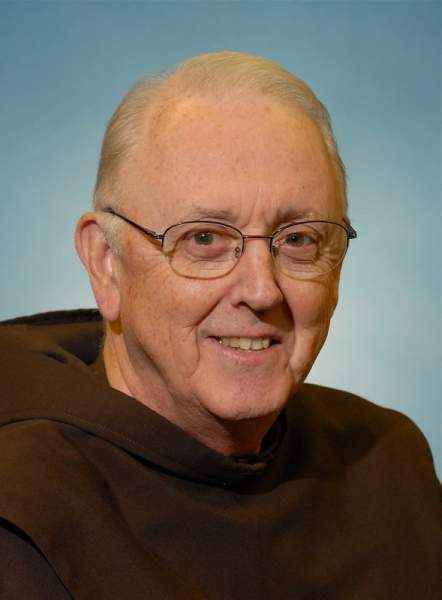 Born on Feb. 1, 1934 in Detroit, Mich., Fr. Jim was one of two children of Marinus and Marion (Wilkinson) Van Vurst. He attended Wilkins Public School and then the Shrine of the Little Flower School in Royal Oak, Mich. He graduated from St. Francis Seminary in Cincinnati and Duns Scotus College in Southfield, Mich., before entering the novitiate on Aug. 15, 1952, and receiving the religious name “Rayner.” He later returned to his baptismal name.

After professing his first vows in 1953, he entered Duns Scotus College in Southfield, where he made his solemn vows on Aug. 16, 1956. Fr. Jim was ordained to the priesthood on June 13, 1961, at St. Leonard College in Dayton, Ohio. His first assignment was to Duns Scotus College Seminary in Southfield, where he remained for 18 years. He served on the faculty and formation team and was college president from 1976 to 1979. While assigned there, Fr. Jim received his graduate degree in psychology from the University of Detroit.

In 1981, Fr Jim was elected Vicar Provincial for the Province of St. John the Baptist and served in that role until 1990. During this time, he was also asked by the Order to serve as the Visitor General for the Santa Barbara Province. From 1978 until 1990, Fr. Jim was the Prefect of Formation for the province. After his sabbatical, he was the director of pastoral care at the Franciscan Center at St. Leonard in Centerville, Ohio, from 1991 to 2002.

In 2002, he created and became the director of the provincial database. He assumed the additional responsibility as the Provincial Delegate for Child Protection in 2005. He held both positions until 2011. Fr. Jim then became the associate pastor of St. Clement Church in St. Bernard until his retirement in 2019. In August of 2019, Fr. Jim moved to St. John the Baptist Friary where he remained until his death.

Fr. Jim was an avid golfer and probably best known for his beautiful watercolor paintings. His passion for painting began in 1988, while visiting the Cincinnati Art Museum. He sold over 100 paintings and there are examples of his work at St. Leonard Center, the motherhouse of the Sisters of Charity and the Provincial Offices for the Franciscans, as well as the Duncan Monastery in British Columbia.

Fr. Jim was preceded in death by his parents. He is survived by his sister, Sr. Marianne Van Vurst, SC. He is also survived by his friar classmates, Fr. Reynolds Garland and Fr. Bruce Hausfeld. Friars and friends will receive Fr. Jim’s body at St. Clement Church in Cincinnati on Monday, Sept. 27 at 9 a.m. The Mass of Christian Burial follows at 10 a.m. Interment will take place following Mass in the friars’ plot at St. Mary Cemetery in Cincinnati.