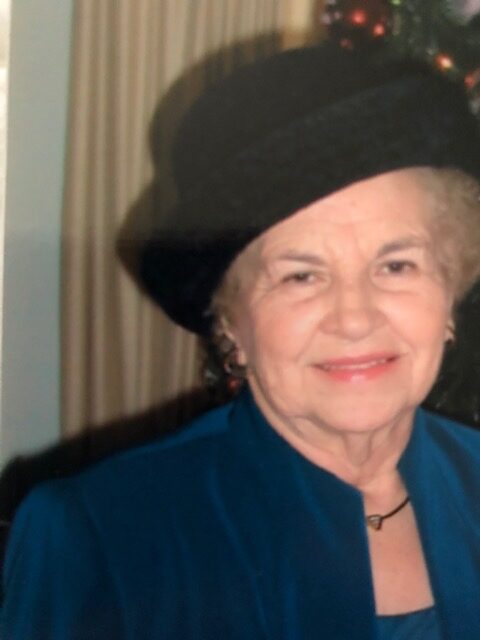 A lifelong member of the Norwood Church of Christ, Gay served many roles, including juice and cookie lady for Vacation Bible School, communion preparer and communicator with the sick and shut-in. In her Norwood View neighborhood, she was known as the Halloween Cupcake Lady. Gay was a good neighbor who helped in anyway she could. The PTA’s of Norwood View and Norwood High School could count on her. She assisted at her voting precinct. She was a valued member of Women’s Group of the YMCA. Gay was often her daughter’s Girl Scout Troop’s “cookie mom.” Crates of cookies would stack up in her house in March.

She supported the Fine Arts.

Gay was a self-proclaimed ambassador for Norwood and Cincinnati. She could be seen waving her flag at the Norwood Day Parades. She was a member of the Rosie Reds and appeared on the sidelines of the Reds Opening Day Parade. She loved exploring the Cincinnati Riverfront or just watching the river from other parks with a view of the river.

As a daughter, Gay cared for her parents and parents-in-law in anyway needed. Gay doted on her nieces and nephews. She gave her love and they reflected it back to her. As a grandmother, no one was better. Every time the grands were together was a holiday.

Being a full time mother to Carolyn and Gary was Gay’s primary job. She read to them, studied with them, played with them and grew with them. In the summers, chores came first for the three of them and then the fun began. Picnics were packed and afternoon excursions to museums, historic sites, parks, and amusements were on the afternoon venue. Often cousins or the children’s friends would come along. She made sure they practiced playing their musical instruments.  She encouraged there imgination and encouraged them in all their endeavors. Both Gay and Paul valued education and made sure their children had the opportunity to get advanced degrees.

Gay’s first allegiance was to her husband Paul. She was born in Casey County Kentucky and he was born in Lewis County Kentucky. They met in Cincinnati where both of their families settled during WW II. When they met she was working as a seamstress. She stood by Paul and provided a loving home. When the kids were older, she began working with him at his business. The Hartwell Tire and Battery and Marathon Gasoline Station was a landmark on the corner of Shadybrook and Vine Street. Gay worked in the office until their retirement. She was his right hand woman performing the duties of greeting customers, recording  sales, running errands and transporting clients who left their cars to be serviced. This allowed the men to tend to the full automobile service of the customers.

In retirement, she and Paul  traveled mainly to visit family throughout the U.S.  Their house continued to be open to visitors who enjoyed their hospitality. Paul had medical issues for several years. Gay was his fulltime caregiver. After Paul’s death, the octogenarian Gay traveled with her children to visit European Landmarks. She had her first ocean cruise. Gay often visited  Williamsburg, Virginia, to visit her daughter’s family and Greenville, South Carolina, to visit her grandson’s family. She enjoyed dates of dining with her son and seeing a Broadway Series play in downtown Cincinnati. Gay  was always ready for an adventure.

When Gay was no longer able to care for her home nor to navigate the many stairs, she moved for the first time in  over sixty years. She became a resident of the caring community of St. Margaret Hall in Cincinnati. For her final years she participated in the many activities and spent as much time as weather permitted outside in the gardens. She continued her  friendly concern for others and was an asset there, also. Gay loved and worked hard wherever she was. She was loyal to her family, church and community.

Gay will be laid to rest next to her husband at the Arlington Memorial Gardens of Cincinnati, Ohio, with a private graveside ceremony on April 1. A celebration of her life will be announced at a future date. Gay’s preferred charity is St. Jude Children’s Research Hospital.