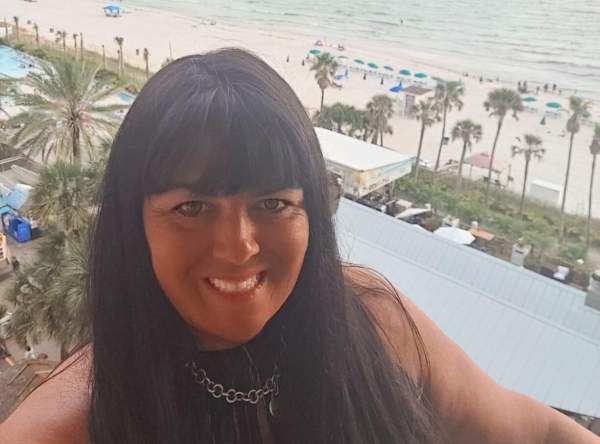 Gina Rebecca Minella, 50, of West Chester, passed away with her family by her side on Sunday, January 9th ,after a long and hard fought battle with Covid pneumonia.

Visitation will be held at the Hodapp Funeral Home, 6410 Cincinnati-Dayton Rd., Liberty Twp., on Thursday, January 13, 2022 from 6pm until 8pm. Funeral service will be held the following morning at 10 am. Interment will immediately follow at the Gate of Heaven Cemetery in Montgomery, Ohio. Masks are required and will be provided.

Gina’s #1 priority was her family, and she took great pride in taking care of them. Gina happily volunteered to host every holiday celebration, birthday party and wedding/baby shower, where would would make enough food for everyone to have seconds (maybe even thirds). She had a way of making everyone feel like they were the most important person in the world. Entertaining and spending time with her family, even if it was just sitting on the couch watching football or The Walking Dead, was one of her favorite things to do.

Gina’s pride and joy was her son, Cody. If you knew Gina, you knew Cody (even if you had never actually met him). There is no denying that Gina was the proudest mom in the world. They were best friends from the start. Although she worked incredibly hard, working two jobs so she could provide anything and everything for Cody, she made time to cheer him on at every event - whether that was a basketball game, a volleyball game, an awards ceremony or even when he played the “blender” in 6th grade band because he wasn’t musically gifted with any other instrument. She was his biggest fan! A few of Cody’s favorite things to do with his mom were singing along to songs for which neither of them knew the lyrics and blaming “the remix” when they messed up; Sunday night dinners where she would cook her famous meatloaf and pork chops; and playing random games they made up on the spot. Gina was born to be a mother. She went above and beyond in everything she did for him, and Cody hopes one day he can be half the parent she was to him.

Gina and her husband Edward had a simple kind of loved; they loved to simply be in each others presence. They often would take Gina’s Jeep Wrangler on long drives with the roof down for “wind therapy”, drive for hours, listen to music and just spend time together. Some of the most memorable moments for Edward were made with Gina on the many trips they’ve taken over the years. They got married in Destin, Florida and took annual trips to Panama City Beach. They stayed In the same hotel each year, and to nobody’s surprise, the workers always remembered Gina. They also recently got to travel to Disney World, Hocking Hills and Niagara Falls. They were a true team. The love between the two of them was undeniable.

Gina had a very special relationship with her sisters, Tammi and Tara. Tara’s favorite memory with Gina is from of her 16th birthday. “Gina always wanted to make my birthday so special. She brought me 16 (yes, 16) balloons to carry from class to class. Then she hired a big singing chicken to come sing to me at lunch. She sang so loud and wouldn’t stop until I stood up and danced with her. Later that same night, she had the football team sing ‘You’ve Lost that Loving Felling’ to me because I loved Top Gun.” Tammi also had a favorite Gina memory from high school. “When I was a senior at Lakota high school, Gina was a freshman. That year she took a home economics class. She knew how much I loved sweets, so every time they did baking, she would station herself in the hallway so that she could see me in between classes and give me a napkin full of some delicious treat. To this day, I’m not sure how she managed to get to her next class without being late!”

Gina had a passion for dance and was an incredible dance teacher for many years at several studios, including the family-owned Allthatjazz Dance Centre. She touched the lives of countless dancers, who unanimously agree that she instilled confidence in them not only as dancers, but also as individuals.

To know Gina was to love her. She loved hard and always had a smile on her face. She never met a stranger. Anywhere you’d go with Gina, you’d expect to run into at least 3 people who knew her. She was an ideal friend - loyal, empathetic, light hearted and she knew how to make you laugh until you cried. She will be greatly missed, but we are finding comfort knowing she is dancing with her mom in heaven.