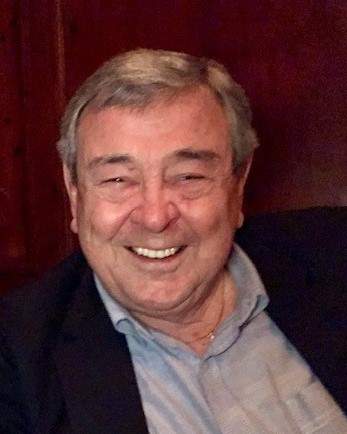 Larry Edward Elliott, age 84, passed away July 21, 2022, following a long illness. Larry was born on December 19, 1937, in Plymouth, Indiana to the late Olive Erdeen and Mark Elliott. His mother remarried his stepfather, Raymond Dimberg, in 1950. He is survived by his wife Gail, his son Brian (Michele) Elliott of Grand Rapids, his daughter Elizabeth (Patrick) Cavanaugh of Cincinnati, five grandchildren - Morgan and Margaret (Maggie) Cavanaugh, Katelyn, Lindsay, and Jack Elliott and sister, Linda Dimberg of Grand Rapids.

Larry graduated in 1959 from Adrian College in Adrian, Michigan with a degree in business. While there he met his wife, Gail and married in August of 1960 and moved to Grand Rapids, Michigan where they raised their family. Larry worked in sales until his retirement as Regional Sales Manager for Howard Miller Clock Company. Upon retirement, Larry and Gail enjoyed traveling to Florida in the winter, visiting their family, cruising around in his convertibles with his grandchildren, and playing many rounds of golf. Eventually, they moved to Florida and made Naples their home.

A memorial visitation will be held Saturday, August 6, 2022, at Hodapp Funeral Home 6410 Cincinnati-Dayton Rd. Liberty, Twp., OH 45044 from 10 a.m. until the time of the memorial service at 11 a.m. A lunch reception will be held immediately following the service at Patrick and Beth Cavanaugh’s home at 5754 Chancery Place, Liberty Township, Ohio 45011.

If desired, donations may be made to the Alpha-1 Foundation.

Fond memories and expressions of sympathy may be shared at www.hodappfuneralhome.com or sent to his wife and family at 5754 Chancery Place, Hamilton Ohio 45011.