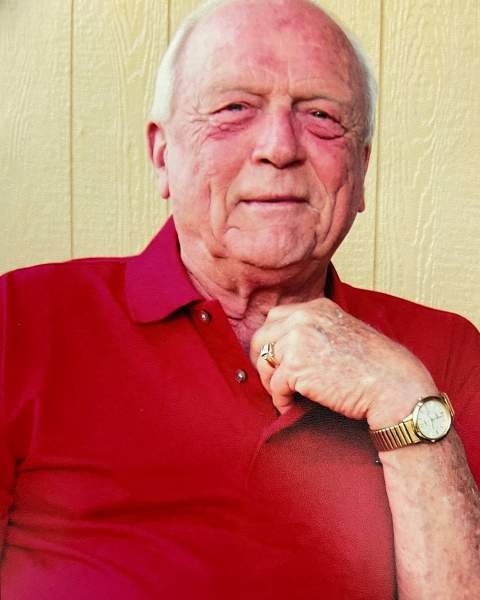 Bob was born on October 21, 1931, to George Augustus Kramp and Evelyn Leona (Zurheide) Kramp in St Louis, MO. Bob graduated from the University of Cincinnati, Class of 1952.  Bob married Jacqueline (Jackie) Ruth Coe on August 29,1952. Bob was deployed to Korea as a First Lieutenant in the US Army.  After Bob’s return from military service, he and his father started a successful home building business which he continued following his father’s death.

Bob retired in his early 50s.  Bob and his beloved wife Jackie built their dream house in Rolling Knolls and they both lived there until they passed.  In retirement, Bob and Jackie enjoyed playing golf, playing cards and socializing with their neighborhood and church friends.  Bob loved gardening.  Bob kept his mind sharp managing his investments and he kept his body in shape maintaining his large house, garden and property.

Bob was a devoted Christian, Husband, Son, Father and Grandfather.  In his almost 91 years, Bob lived life to fullest and always enjoyed spending time with family and friends.

Bob is preceded in death by his parents, and the love of his life, his wife Jackie.  Bob had no siblings.

A Christian memorial service will be held on Thursday, September 8th at Royal Redeemer Lutheran Church at 7127 Dutchland Pkwy., Liberty Township, OH, 45044.  Family visitation will begin at 12:00 PM followed by public visitation at 12:30 PM.  A Christian memorial service led by Pastor John Benham will begin at 1:00 PM.  Following the service Bob will be laid to rest at Rest Haven Cemetery.