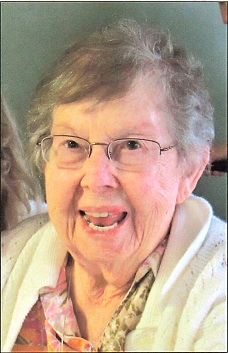 Edrich, Sr. Marie Clement SFP (Myrtle Ann) , our beloved Sister, gently passed into the heart of God on February 17, 2021 at the age of 95.  Born in Cincinnati to the late Paul and Myrtle Edrich, she was the oldest of five siblings.  She joined the Franciscan Sisters of the Poor in 1943 after graduating from Immaculate Conception Academy in Oldenburg, IN.  She professed Perpetual Profession in 1951.  She studied pharmacology at Cincinnati College of Pharmacy and served in the filed for a number of years before being sent for study in Sacred Science at Regina Mundi University in Rome.  She later obtained an additional degree in Education and Philosophy at Xavier University.  She put all her education and spiritual richness to good use by being an integrated person who adapted to any circumstance.  In her early years, she spent a good amount of her energies working with the young members of the Congregation in the States and in Italy; a ministry she identified as a joy and privilege.  Later, she served in a leadership role in Italy.  With her recognized gifts in leadership, she was then asked to serve on the leadership team of the Congregation.  She eventually returned to Italy for a few years, before returning to her native Cincinnati.  She experienced a wondrous circle of life.  In more recent years, she was a community member at Pinecroft House of Peace, where she offered kind and gracious hospitality to all who crossed her path.  In 2017, she relocated to Magnificat Community where she gave of her goodness to fellow Sisters and Staff.  She treasured her life call and valued relationship over the years through phone calls, faithful letter writing or computer communique.  It could easily be said “all who knew her, loved her”.

She was preceded in death by her parents and her brothers, Andrew, Frankie, and Fr. Paul Edrich.  She will be lovingly remembered and deeply missed by her Sisters; the Franciscan Sisters of the poor, her sisters; Mary Cunningham and Bernadette Tallarico, her niece; Anne Cunningham, and nephews; William and James Cunningham and Dominic Tallarico, cousins and countless friends.  A private Wake and Liturgy of Resurrection will be held for family and Sisters on Friday, February 26th at St. Clare Chapel.  The service will be livestreamed on Facebook at Franciscan Sisters of the Poor/US Area at 10:00 am.  In lieu of flowers, kindly direct donations in her memory to:  Franciscan Ministries, Inc., 110 Compton Road, Cincinnati, OH  45215 or at www.franciscanministriesinc.org.